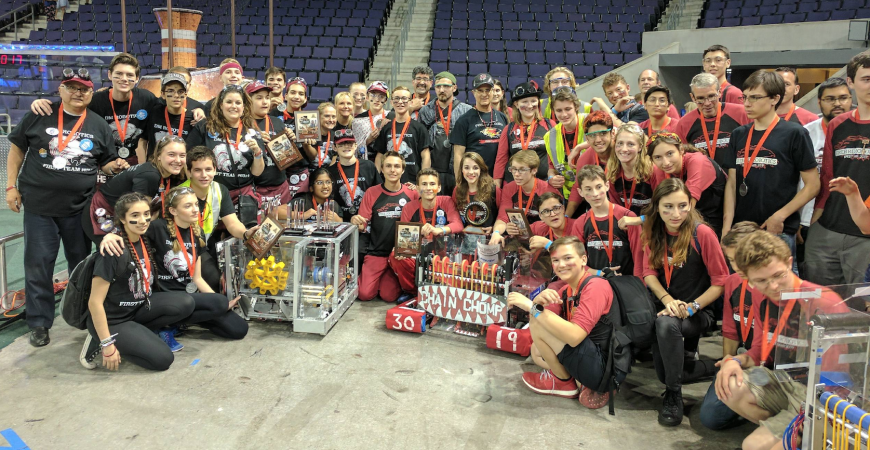 Now she has to write a check for $14,300. That’s how much was money was raised during the nine-day effort, with the Scottsdale Charros pitching in $2,500 to each of the two high schools. With Kirby’s dollar-for dollar match, the total raised comes to $28,600.

“I am so grateful to our generous community for supporting our STEM students in such a big way,” said Kirby. “Students need to know that we’re behind them all the way.”

Scottsdale Charro Education Chairman Rick Carpinelli is equally pleased. “Our community is privileged to have such talented children and supportive teachers.   The Charros are happy that we have the opportunity to support these initiatives.”

Wolves robotics coach Michelle Okun is grateful both teams were able to go to the Texas competition. “DM Robotics is blown away by the generosity of the Charros and Ms. Kirby. A big ‘howl out’ and thank you from our entire team!” Chaparral co-coach Amy Palatucci echoed the sentiment. “Thank you all so much for the continued interest and support in all of our SUSD robotics teams of all ages!”

Chaparral and Desert Mountain represented SUSD well in the Houston World Championships: Desert Mountain’s Wolfpack Team 6314 is the first SUSD robotics team to be part of an alliance that advanced to the finals of the FIRST competition and only the second team ever from Arizona to achieve that. The combination Arizona-Georgia-Idaho-Nevada alliance placed first in its division and placed third overall, a major accomplishment for Desert Mountain’s rookie team.

Chaparral’s Team 3091 robotics team made a major impression at the Texas championships, as well.  It captured the Gracious Professionalism Award for its division. As part of its philosophy of supporting others, the Firebirds created a texting hotline during the Houston competition through which other teams could seek troubleshooting assistance from the Firebirds. Through its 301-911 hotline, the Chaparral team was able to help teams that were having electrical and mechanical issues with their robots.

The FIRST Robotics Competition combines sports excitement with the rigors of science and technology. Under strict rules, limited resources and time limits, teams are challenged to fund-raise, design a brand, exercise teamwork, and build and program robots to perform tasks against competitors. More than 15,000 students from around the world traveled to Houston for the April 19-22 event.

Outside of the competitions, members of both schools’ robotics teams had opportunities to network with top professionals from NASA and Boeing, as well as renowned engineers, such as Dean Kamen, founder of FIRST® robotics, who invented the Segway personal transportation device. Chaparral’s female team members attended an event hosted by The National Center for Women in Technology and networked with female professionals in technology fields. Lastly, all students from both SUSD teams attended Scholarship Row, where they were able to speak to representatives from colleges, universities and organizations that provide FIRST Scholarships. This year, more than $50 million in scholarships will be offered to FIRST participants.

FIRST stands for ‘For Inspiration and Recognition of Science and Technology.’

There are no upcoming events at this time.